The life and times of Indira Gandhi is appropriately eventful and dramatic. As we do a quick round-up of how Bollywood has portrayed one of the most powerful leaders in India’s history, a curious truth presents itself — cinema ain’t too fond of the former Prime Minister.

In 2012, while accepting an award instituted in her name, poet Gulzar opted to evoke an aspect of Indira Gandhi that has become her calling card — her much-revered manly qualities. The 27th Indira Gandhi National Integration award in hand, the maker of Aandhi said, chuckling, “Even today, when describing a strong man, we use Indira Gandhi as an example.” The Iron Lady of India, the former Prime Minister from 1966-77 and 1980-84 whose 101st birth anniversary is today, led a controversial life, more eventful and dramatic than any public personality of her time. As the only daughter of Pandit Nehru, she had it all. Her remarkable transformation from the daughter of Nehru to a powerful daughter of India, the Emergency and hunger for power, the doting mother and wily politician, the fashion icon and much-reviled dynast. It goes on and on. A famous slogan of the 1970s says it all, ‘Indira is India and India is Indira.’ A life that began with a dream, unfortunately, ended in tragedy. She was assassinated, in October 1984, by the very men hired to protect her. 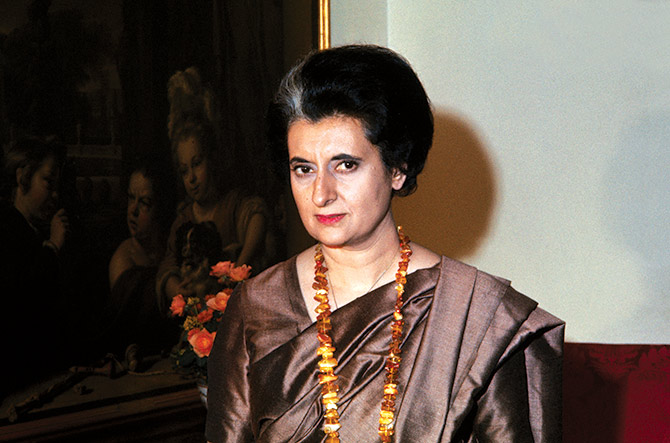 So much fodder and yet, Indira Gandhi, the superwoman, leader, daughter, mother and the legacy (tainted, dented, good or bad) has remained curiously absent from cinema. She ain’t a favourite with filmmakers. Netaji Bose is, and so is the Father of the Nation. Even Jawaharlal Nehru, who has preoccupied Shyam Benegal and of course whose indirect and direct influence shaped Raj Kapoor, Dilip Kumar, V. Shataram and other dream merchants of the 1950s, has managed to inspire and leave a mark on Bollywood and the cultural and social landscape. Why not Indira Gandhi? Why hasn’t she or her policies, ideology, legacy or mythology found resonance in cinema and soft culture? Probably, because her life itself was so colourful that Bollywood wouldn’t be able to contain it all on its screen running time. Maybe, it’s her complicated legacy, or lack of idealism that made Mahatma Gandhi and Nehru a beloved cinema study. Any patriotic paean to Mrs Gandhi, once mocked as ‘gungi gudiya,’ in the Modi era is likely to be dismissed as Congress propaganda. And if the film is made by a Gandhi sympathizer, it will be difficult to escape charges of hagiography. So, a cinematic affinity for Gandhi isn’t forthcoming and if it did, any potential ‘Gandhi on cinema’ is fraught with risks.

When talking of Mrs Gandhi, the first cinematic portrait that shows up on your mind’s feed is 1975’s Aandhi. Director Gulzar has taken pains to deny that it’s based on Gandhi, but the visual clues say otherwise. For starters, did anyone ever notice that Aandhi rhymes with Gandhi? Okay, that could either be purely coincidental or a bit of a stretch. Beneath the politics of Aandhi lies a great love story as the film follows the life of Aarti Devi, a thinly-veiled version of India’s only female Prime Minister. Aarti Devi is played by Suchitra Sen with just the right touch of silver in her hair. But then, this could be entirely Gulzar’s doing, who loves to age actors on screen. In Aandhi, Aarti reminds her husband essayed by Sanjeev Kumar how he longed for the greys right since his younger days. Aarti Devi, like Indira Gandhi, is born to a rich father (Rehman as a sophisticated, forward-thinking businessman). She wants to enter politics, “to serve people and not his business interests,” as she makes it plain to her domineering dad. After falling in love with a hotel manager (Sanjeev Kumar) she decides to marry him, against her father’s wishes. He didn’t expect her to follow in the footsteps of millions of ordinary “creatures.” She was made for something special. What might that be? The answer is politics. 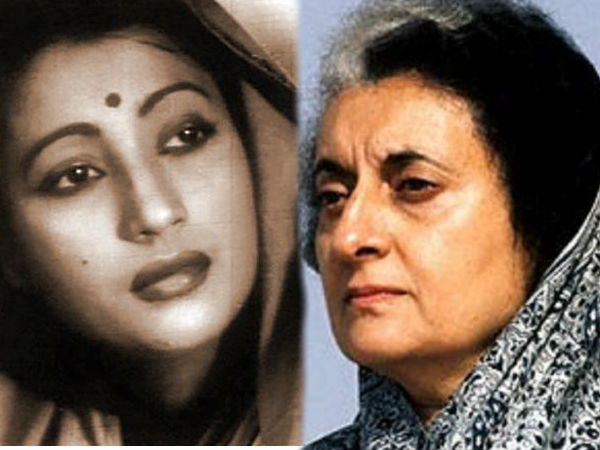 Aarti Devi becomes a much-respected politician and Gulzar frames the story in flashback even as an all-important election season kicks off with Aarti Devi going to the public seeking mandate. Many say that the film resembles Indira Gandhi’s relationship with husband Feroze Gandhi. So, how much of Aandhi is Gandhi? To begin with, Aarti Devi has a physical Indira Gandhi resemblance, as Suchitra Sen adopts the way Gandhi wore her sari and carried herself in a male coterie. In other words, her mannerisms. Like Gandhi, she’s a mass leader with a husband who sits on the fence. To be sure, Sanjeev Kumar’s character is a regressive-minded man with modest means (or perhaps, it would be apt to call him old-school) who wants his wife to sit at home and carry out domestic duties. In one scene between Sen and Rehman, in the backdrop hangs a picture of Nehru and Indira. You can take whatever cues you might want to from it.

Two years after Aandhi, Indira Gandhi once again made her presence felt on cinema — her politics, to be specific. Congress MP Amrit Nahata, a vociferous critic of the Emergency, produced a spoof on Gandhi and her errant son, Sanjay Gandhi. Kissa Kursi Ka (1977) is a Sanjay Gandhi show all the way though, as Nahata takes a dig at everything from the much-publicised ‘people’s car’, a pet project of the heir apparent to rampant unemployment of the time (the brilliant brainwave being to mobilise the gainfully unemployed to kill rats, thus taking two birds with one stone — the country will be rodent-free and young men shall find employment). Naturally, the film was banned, with Sanjay Gandhi reportedly confiscating the prints. The Nahata-Gandhi battle went to court eventually with Gandhi and former I&B minister V. C Shukla facing trial.

More recently, Madhur Bhandarkar’s Indu Sarkar revisited the Emergency imposed by Gandhi in 1975. The 2017 film depicts Indira Gandhi only marginally and once again, Sanjay Gandhi makes for a forceful villain. Played by Neil Nitin Mukesh, the Sanjay Gandhi character makes the most of the punchy lines given to him by Bhandarkar and writer Sanjay Chhel. “Emergency mein emotion nahin,” declares Mukesh. “Mere orders chalte hain.” It’s an open secret as to who called the shots during what has been billed as one of India’s darkest hours.

In the end, Gandhi’s other lingering Bollywood legacy is Amitabh Bachchan and his angry young man. Some say Bachchan’s Vijay of Deewaar and Trishul is the creation of Emergency while writers Salim-Javed themselves have insisted that they were merely reflecting the times they were living in. The Bachchan-Gandhi ties date back to the time of Nehru and Harivansh Rai Bachchan. Amitabh and Rajiv Gandhi were close friends, upon whose invitation a reluctant Big B entered politics. Their subsequent fall-out is equally the stuff of legends.

Facebook Patent Shows Software That Can Analyse Who Lives With You

You will be banned on WhatsApp if you did these things; why you should worry and what you should do