LIVE: After a while, the launch of Chandrayaan-2, refueling in 'Bahubali' continues - Indiarox
FacebookTwitterInstagramGoogleYoutube

Special things
Launching from Sriharikota at 2:43 pm
Launched on July 15, 2013
3.8 ton weight is Chandrayaan-2
Chandrayaan-2 will reach the surface of the moon in 47 days
978 crores is the total cost of Chandrayaan-2
The taller than the 15-story building is the Bahubali

The ambitious Moon mission of ISRO, Chandrayaan-2 will be launched from Satish Dhawan Space Center, Sriharikota sometime later at 2.43 pm. The GSLV Mark-3 rocket, popularly known as ‘Bahubali’ is working in a normal way. Around 20 hours of countdown to Chandrayaan-2 was started from 6:53 am on Sunday evening. Earlier, it was to be launched on July 15, but it was postponed when it came to know of technical flaws like a leak in the launch vehicle at some time. ISRO has made several changes to this mission, which will not affect the delays in launch.

Rain in Sriharikota
Rain started around Satish Dhawan Space Center in Sriharikota. In the meantime, the work of refueling in the rocket is also underway in the direction of ISRO scientists.

The special thing is that, despite the launch date, Chandrayaan-2 will arrive on the Moon on 6-7 September. The purpose of this is to bring it on time that the landers and rover can work according to the schedule. To save time, Chandrayaan will take less than one round of earth.

There were 5 rounds before, but now it will rotate 4. Its landing is fixed in such a place where the sunlight is high. The lights will begin to subside after September 21. Lander-Rover has to work for 15 days, so it is important to reach the time. 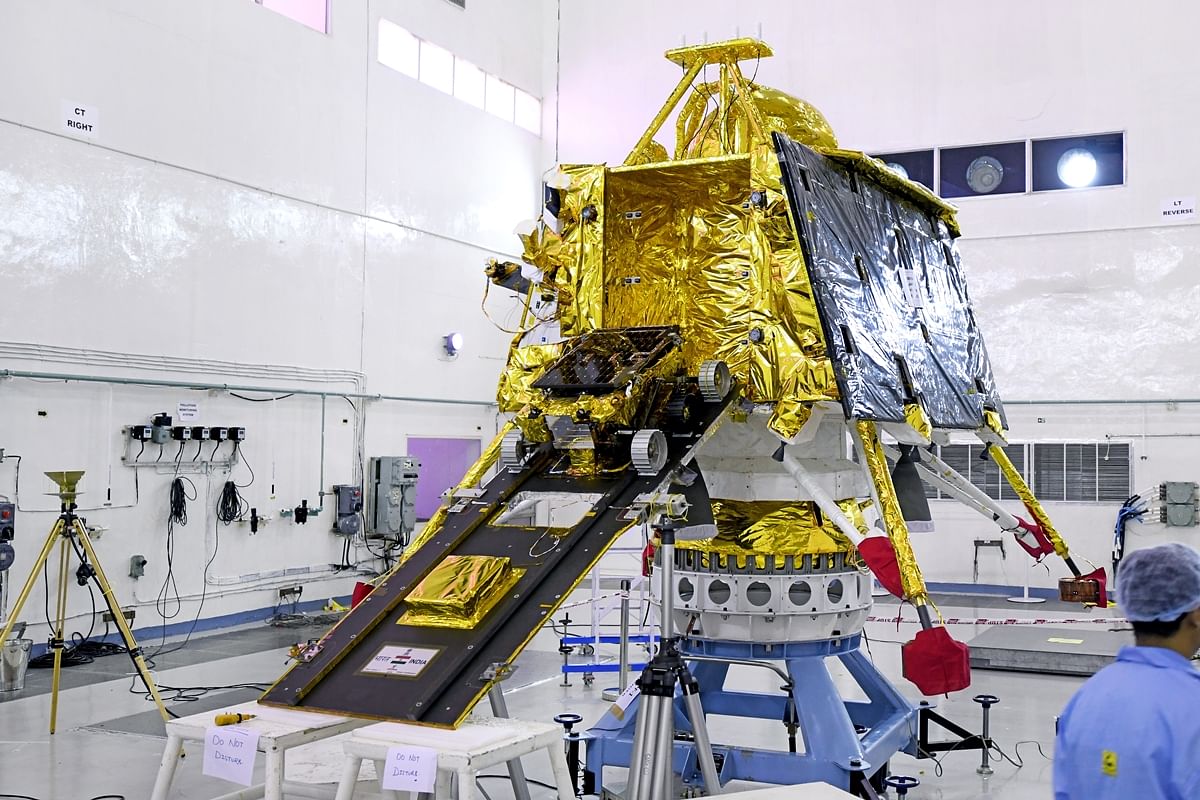 There is a lot of enthusiasm in the people to see the launch of India’s Big Mission Chandrayaan-2 and 7,134 people have registered online for viewing live now. ISRO has recently started the rocket launching process for the public to see live. People can sit in a specially created gallery and watch the launch of Chandrayaan-2. It has a capacity to accommodate a total of 10 thousand people.

Orbiter, Vikram and Pragyan will take the front of the moon
This rocket will have three modules orbiter, lander (Vikram) and rover (pragyan). Under this mission, ISRO will land the lander at the southern pole of the Moon. This time, Chandrayaan-2 will weigh 3,877 kg. It is about three times more than the Chandrayaan-1 mission (1380 kg). The speed of the rover inside the lender will be 1 cm per second. After reaching the orbit of the orbit, the orbiter will work for one year.

Total 13 payloads in Chandrayaan 2
Chandrayaan-2, built by indigenous technology, has a total of 13 payloads. In eight orbits, three payload lander vendors and two payload rowers are in pragyan. Five payloads belong to India, three Europe, two America and one from Bulgaria.

GSLV Mark III is designed to carry 4-ton class satellites in Geosynchronous Transfer Orbit (GTO). There are two solid straps on motor in its vehicle. It has a core liquid booster and is cryogenic in the above phase. So far ISRO has sent 3 GSLV-MK3 rockets.

GSLV-MK3 launch vehicle has been used in the Chandranya Mission of Rs 978 crore. It has a CE-20 engine equipped with three-stage cryogenic technology. In liquid cryogenic stage uses liquid oxygen as liquid hydrogen and oxidizer as fuel.

What is Chandrayaan-2 mission?
This is India’s moon mission, in which the vehicle will be sent to the southern pole of the moon.
What is the purpose?

If Chandrayaan-2 explores the possibility of snow on the moon, then it will be possible for human beings to travel here in the future.
This will open the way for new discoveries in space science as well as in the field of research.
– Chandrayan-2 will land on the Moon’s South Pole after 53 to 54 days of launch and will collect this data for the next 14 days.

ISRO has designed GSLV primarily to launch communication satellites. These include the satellite, which is set up on geocynchronous transfer orbit 250×36000 kilometers. From here the satellites are delivered to its final point. Geosynchronous Earth Orbit (GEO) which transmits the engine satellite in it to 36 thousand kilometers. Due to its geo-synchronous nature, the satellite revolves around a fixed position in its orbit. It appears on earth from a fixed place.

Chandrayaan-2: Why are we going to the moon?
Chandrayaan-2: Moon is the closest satellite to the Earth through which efforts can be made to search in space and related data can also be collected. It will also be the center for testing technology required for intense space missions.